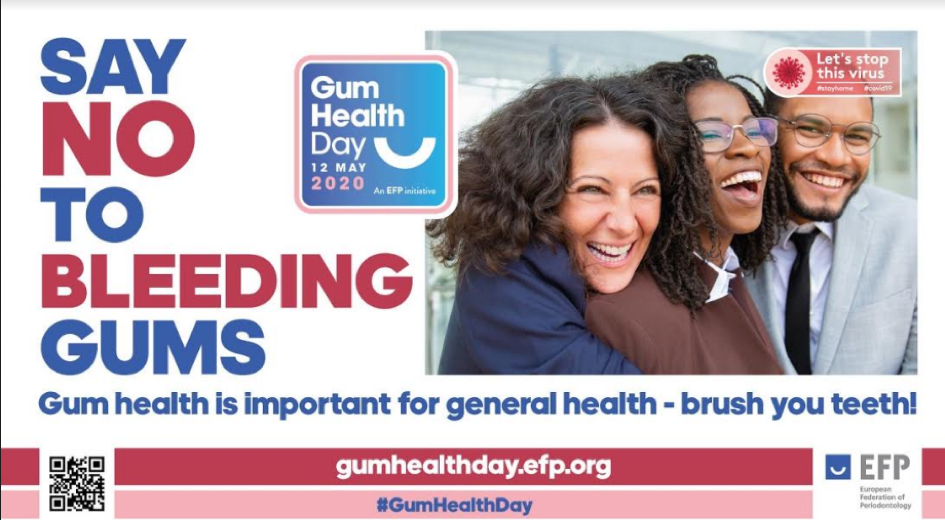 Gum Health: EFP aims to make millions of people aware that bleeding gums are not normal and that they indicate the presence of gum disease (gingivitis, periodontitis, or peri-implantitis).

Colgate is proud to join the European Federation of Periodontology (EFP) in May in the effort to promote the awareness campaign “Say NO to bleeding gums” with the occasion of Gum Health Day 2020. The campaign seeks to raise public awareness of the importance of identifying bleeding gums as a sign of gum disease, the chronic oral condition often associated with serious general health issues. This awareness initiative encourages people with bleeding gums to consult their dentist or pharmacist and encompasses a number of educational activities that will be rolled-out across Europe, with the emphasis on online communication.

EFP aims to make millions of people aware that bleeding gums are not normal and that they indicate the presence of gum disease (gingivitis, periodontitis, or peri-implantitis). Gum disease affects oral health and can lead to tooth loss, problems with speaking and chewing, and can also compromise overall health and quality of life.

To further document the campaign, the EFP has provided an updated dossier on periodontal disease.

EFP will also host on its European social media channels a number of awareness initiatives which can be followed on:

Colgate – Palmolive  stands behind the “Say NO to bleeding Gums” message and encourages all dental professionals to promote this message further towards their patients and sign the  EFP Manifesto on periodontal and general health.

About the EFP: The European Federation of Periodontology (EFP) is a non-profit umbrella organisation comprising 37 national scientific societies of periodontology – and the leading global voice on gum health and gum disease. Colgate is one of the EPF Partners, joining EFP in strategic initiatives aimed at improving oral health in Europe.


Dear Reader,
You will need to login if you want to read the comments made by dental professional readers, or to make comments on the articles yourself.

Please enable JavaScript in order to continue. You can find instruction for your browser here.
Not signed up yet? Click here

Many thanks,
The #ColgateDialogue team

Begin typing your search above and press return to search. Press Esc to cancel.